Jump to recipe
Here’s the richest of the tea-flavored ice cream recipes I made for my Mad Hatter’s Birthday Party. I tried a cardamon flavored recipe last year – I definitely liked this better with the richness of the mixed spices and tea.

One of my friends was surprised that in America Chai meant a sweetened, spiced creamy tea mixture since she first heard “chai” simply as the Russian word for tea. Chai is also simply the term for tea in India: so “chai tea” is really completely redundant. Masala chai is spiced tea – regular chai may also have milk and sugar, in the British manner, but it doesn’t have the aromatic spices.

Did you know one reason the British wanted to colonize India was to create a market for tea? The first Europeans went there for spices, but changing fashions in European ideas of digestion & tastes in cuisine made spices a less profitable export by the time the British began to build their empire.

The British had already pushed into China’s tea industry, though, and those merchants saw a new audience for those wares and began to experiment with growing tea in the mountains of India and encouraging its consumption wherever they could as they gained power.

This recipe uses whole Indian spices, which may be expensive or difficult to find if you don’t have access to a range of imported Asian ingredients at your grocery stores. If you get them, though, you can make delicious masala chai anytime you like.

Cooking the ice cream also takes a few extra steps – you need to give it time to infuse the whole spices, then the tea for a shorter period. After the infusions it’s cooked into a very rich custard, which takes some careful stirring to get it the right consistency without burning it.

The custard should cool completely before it can be chilled – so this isn’t a recipe you should take on unless you have an hour or two to work on it a day or two before you plan to serve it. The flavor is wonderful, though, and the texture is so rich and creamy my sister described it as “buttery creamy” – worth it for a special occasion. 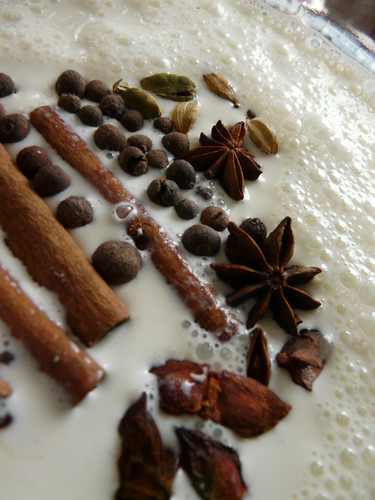 Note: I was able to use my mom’s microwave with a built in probe thermometer for the first few steps, which is nice for quick, accurate heating. For cooked dairy recipes, you want to avoid boiling the mixture because it will develop a skin on top in the early steps or curdle the custard later. It isn’t the end of the world if it does happen: I managed to curdle the custard by letting it cook a bit too long, but I just strained it again to get rid of any bits of overcooked egg: 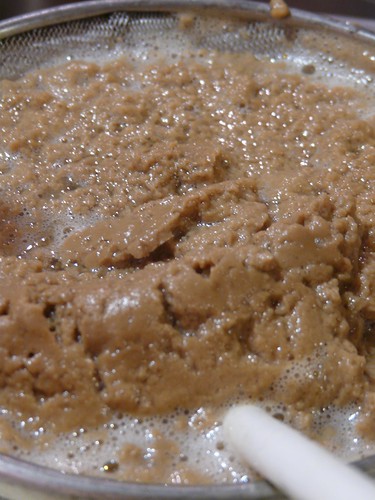