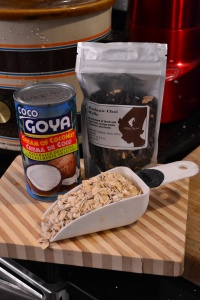 I solved a craving and a resolution with very little effort tonight, so I’m feeling virtuous and clever. Not something oatmeal normally does for me, but I’ll take my successes where I can find them. And now I have breakfast made for the rest of the week, so I can stay up later than I ought!

I’ve been seeing slow-cooker oatmeal in Pinterest for a while, and it’s been making me think of the amazing avena de coco (coconut oatmeal) I used to have at Nellie’s and Cafe Colao in Humboldt Park while I was doing my grad school program there. It’s a secret family recipe and it’s amazing. So are their pasteles de guayaba with cream cheese and thick pink guava filling. And the omelets. I like my pastelon recipe from Iris better, but theirs is good too.

If I were less lazy on weekend mornings, I would just go there for brunch. If I lived in the neighborhood you could probably use the cafe as a post office for me too, like we did for the leaders of the Puerto Rican Cultural Center. If you live in Chicago, you should definitely go to Nellie’s for brunch on a weekend. You won’t leave disappointed.

But since I’m lazy and cooking at night, I figured I’d see if I could find hints of the technique online. All I found were reviews telling me to go to the restaurant. In a conversation I once had with Dr. Jose Lopez, whose family owns the restaurants, he mentioned his grandmother would make a “tea” of spices into a syrup she put into the oatmeal.

So I decided to go literal and keep things easier by using chai tea for the spices and cream of coconut for flavor, texture, and sweetnes. Here is my version – not authentic, and probably subject to further experimentation in the future. But everyone who tasted it tonight agreed it was pretty dang good for oatmeal (and it made my apartment smell awesome too).

I used a very nice chai blend from Julius Meinl recommended by my friend E. and made a large pot of tea, pouring out enough for my sister and I to drink, then putting the leaves back in to brew extra strong before straining it into the crock pot and mixing in the entire can of Cream of Coconut.

With the liquids already well mixed, I stirred in the oatmeal and put it on low with the cover on. I came back a few hours later and it was looking pretty good, a bit more syrupy than I wanted and I was afraid it might not have enough liquids:

But after letting it cook for about 4 hours (with several peeks and stirs along the way) I decided it was thick enough and divided it up in to storage containers for the week. These are fairly generous servings and I had doled out taster bits to all of my housemates along the way, so it could definitely have been 6 or possibly more servings if I divided it up differently: 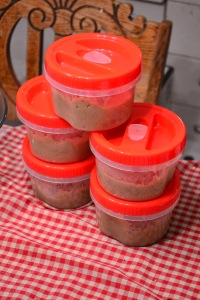 You could definitely put this in the slow cooker at night and come back in the morning to hot oatmeal. I just would rather microwave it than do dishes in the morning, so this means I’m all done.